skip to main | skip to sidebar

Greg posted a while ago about his '5' - the hypothetical 5 celebrities he'd be allowed to sleep with, if given the opportunity, and he took a shot at what he thought my list would look like. He did OK, but I think I'll amend my list.

1. John Cusack - really, is there any question that he'd be #1?
2. Jim Sturgess - he's cute, he sings, and he has a killer accent. It doesn't get better than that. Ok, I'll give you 2 pictures, just cause he's so stinking cute.
3. Brad Paisely - Ok, most of his songs are cheesy, but he's adorable.
4. Matt Damon - Even though I can't stay awake during a Bourne movie, he's still hot.
5. Jude Law - I think I have a thing for British accents...

I think we're going to have to start keeping track of all the really zany, bizarre, off the wall things that we say to our kids. Greg had a classic tonight: "Mari, stop spitting in my beer!!!" 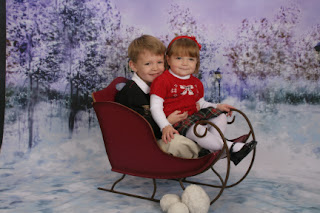 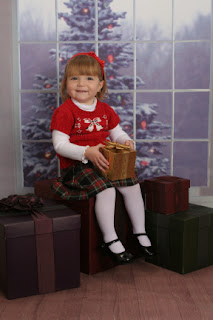 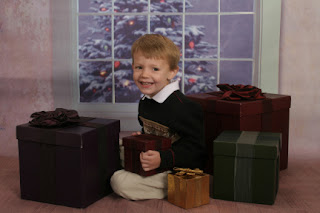 I love Christmas. I love the lights, the songs, the smells, the festive feeling in the air. I even love the crowded parking lots and hustle and bustle of stores, and the fact that we're going to be so busy for the entire month of December that we probably really won't have time to breathe. I love the tradition we started as a family a few years ago - we go to the early church service on Christmas Eve, then we go out to a nice restaurant for dinner (the one time of the year we even attempt to do a dress-up dinner out with the kids!)

Most of all, I really love watching my kids on Christmas morning. I remember the wonderment and magic of Christmas morning when I was a kid, and Greg and I are doing our best to recreate it for Owen and Mariana. My dad was great at setting the scene for Christmas morning - he used to make us wait at the top of the stairs while he went down to 'Make sure Santa came'. Really, he was turning on the lights on the tree and playing carols on the stereo, so everything would look perfect when we came down. My brother and I were in high school and college and we'd be sitting at the top of the stairs like two little kids, anxiously awaiting permission to come down :) This is definitely something I'm passing on to my kids. I want their memories of Christmas morning to be as warm and fuzzy and magical as mine.

Just to put you in the mood, I'll share a few of the pictures we had taken of Owen and Mariana at Kiddie Kandids earlier this week. They turned out so cute, and I just don't believe how big my kids are getting. Aren't I supposed to have two little babies still?

We're leaving early tomorrow morning for a week in sunny Florida! We're going to stay with Greg's dad and his wife, and do an early Christmas with the kids, plus we get to hang out with Jess, Dylan and Morgan while we're there (yay!!) Then we have Hart and Melissa's Latkapalooza the day after we get back, Owen's birthday party, Heather and Chris's Open House and Heather's cookie exchange the following weekend, then its pretty much Christmas! Did I mention how much I love this time of year?
Posted by bobi1218 at 9:53 AM 2 comments: 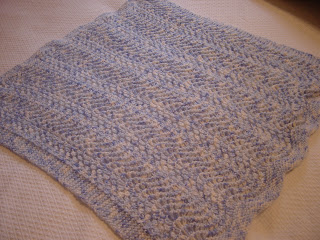 Greg's cousin Jason and his wife Diane are expecting their first baby, a boy, to arrive this month. I just finished a feather & fan baby blanket for them, its ready to go in the mail as soon as hear that Baby Boy P**** has made his debut.

I used Laines du Nord Baby Cover in a blue/white variegated colorway, which works really well with the lace pattern, I think. The yarn is great - 1 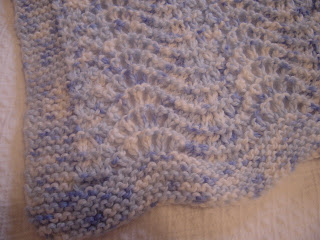 00% wool, so its warm, but its also soft and squishy. I'm going to miss knitting this blanket, because I loved cuddling up with it :)

In other news, we're all sick. Runny noses, coughing, sore throats, the whole 9 yards. All four of us. And we're out of tissues and no one has the energy to go get more, so we're carrying around rolls of toilet paper. Classy.
Posted by bobi1218 at 10:24 AM 1 comment: 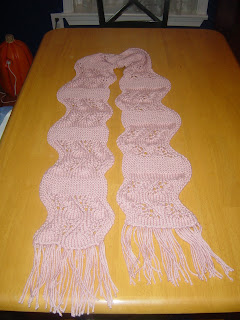 I've been participating in the International Scarf Exchange for the past few rounds. For you non-knitting readers, the ISE is a really cool exchange involving about 200 knitters from all around the world, you make a scarf (can be handknit, crochet, or hand woven) for your secret pal, while another secret pal is making one for you. Last exchange, I sent a scarf to Switzerland and received one from Scotland, very cool. This time, the pal I am knitting for is in the US, but still pretty far away.

I finished the scarf for my pal the other night. I made a Sinuously Curved Lace Scarf from SweaterBabe.com. It was a fun knit, the lace wasn't too difficult, the Debbie Bliss Cashmerino Aran was lovely to knit with, and I think it looks terrific :) I will definitely make this pattern again! I will change the lace repeats a bit next time, though - the first 5 rows of the repeat are just a stockinette section, which looks good on the 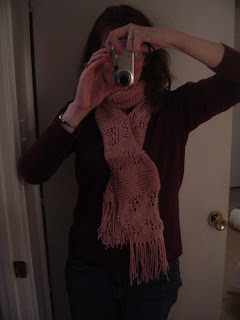 ends, but not in the middle of the scarf. I didn't notice that until I was too far into the scarf to frog back. So its not horrible, but I notice it.

Sorry about the crappy quality of the pics. Everyone knows that photography is not my art :) Plus, it was dark and rainy yesterday, so the lighting is bad. The actual color is a really pretty dusty rose. 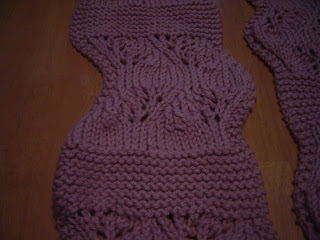 My book club discussed The Handmaid’s Tale by Margaret Atwood for October. I was so disappointed in this book, I thought it had potential to be great, but it really fell short.

It is the story of Offred (pronounced Of Fred), a handmaid in the Republic of Gilead, a fictional, futuristic United States taken over by extreme right-wing Christians. In a world of declining birthrates, handmaids are assigned to top-ranking officials for procreation purposes. Women are strictly controlled in Gileadian society – they must dress according to their class, no social contact with men, they cannot own property, control money, hold jobs, or even read.

The book is billed as a ‘feminist 1984’ and it definitely had a 1984-knockoff feel to it. Instead of Big Brother, the ‘Eyes’ watch everyone, anyone defying the government is tortured and/or killed, the news is full of lies, the society is constantly at war, etc. From a literary standpoint, it was nowhere close to 1984, Atwood’s writing is pompous and self-indulgent and her character development is sorely lacking. From a feminist viewpoint (not that I really claim to be one), it’s a sad commentary on women in today’s society. First, that we would let ourselves be degraded to that point, and second that we would then be pleased with things as trite as black market fashion magazines and sparkly dresses.

I've been tagged by Alicia (bajanknit)

Here are the rules:
1. Link to the person that tagged you and post the rules on your blog
2. Share 7 random and/or weird facts about yourself
3. Tag 7 random people at the end of your post and include links to their blogs. Let each person know that they've been tagged by leaving a comment on their blog.

So let’s see what I can come up with…

1. I can’t stand when the sleeve cuffs on people’s T-shirts are flipped up. I have to turn them back down. I even fight the urge to go up to complete strangers out in public and ‘fix’ their shirts. Greg flips his up just to annoy me.

2. I am a very, very messy person by nature. I try very hard to combat it, but its hard.

3. I can’t draw. At all. My dad is a pretty good artist, but apparently he didn’t feel it was necessary to pass this cool talent on to me.

4. I also can’t sing. I’m completely tone-deaf. Although, everyone else in my family is also, so I guess I can’t really blame anyone for that.

5. I am horrible at keeping in touch with people. So all of my friends that I don’t write to or don’t call – I still love you!

7. If I could look like any celebrity, it would be Jennifer Garner. But I wouldn’t marry Ben Affleck, though, I think Matt Damon is much hotter.